Next Step in Diversity Training: Teachers Learn to Face Their Unconscious Biases 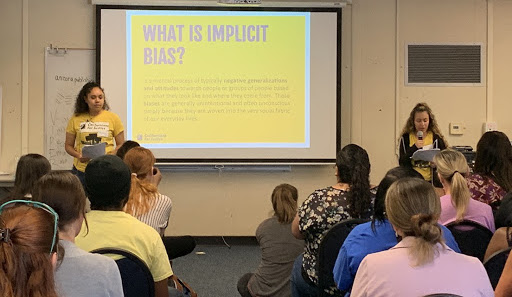 Teachers—and their implicit biases—can directly impact the opportunities afforded to students of color. Teachers make the first decisions about behavioral consequences that lead to referrals and suspensions. And they often serve as gatekeepers for gifted, honors, and Advanced Placement courses, deciding who to recommend for these tracks.

As part of efforts to address these inequities, some districts are turning to professional development.

They’re holding trainings that aim to make teachers more aware of their unconscious biases—and, hopefully, change their behavior in the classroom.

“Since I’ve been working in the district, we’ve had all kinds of PD on stereotypes, but this was a little different,” said Joi Mahoney-Curry, the Title I literacy lead at Boulevard Elementary School in the Cleveland Heights-University Heights City school district, who participated in the district’s implicit-bias training.

Historically, teacher diversity trainings have been focused on understanding the behavior or characteristics of students who come from different backgrounds than their teachers, said Kathleen King Thorius, the executive director of the Great Lakes Equity Center in Indianapolis. Implicit bias and equity training flips this script, asking teachers to critically examine how their own identities have shaped their experiences. And it proposes a call to action: What should we, as teachers, do about inequities?

In California’s Long Beach Unified school district, students are leading some of these conversations.

The district is working with Californians for Justice, a youth advocacy organization for equity in California schools, on a partnership aiming to lessen the racial disparities in the school system. In the district last school year, almost 10 percent of black students and 7 percent of Pacific Islander students had been suspended at least once, compared to about 2 percent of white students.

As part of its work, the advocacy organization has offered two voluntary trainings open to district staff—one on relationship-centered schools, and one on implicit bias. Sessions are facilitated by students who have been trained as youth leaders by CFJ.

Teachers and administrators of Long Beach Unified school district do a group stretch during a professional development day about implicit bias on April 13. Californians for Justice, a youth advocacy organization for equity in California schools, led the voluntary training at the Teacher Resource Center in Long Beach, Calif.
—Meg Oliphant for Education Week

Kristina Kim, a high school Spanish teacher in the district, attended the implicit-bias training in April. When one student talked about a teacher who had made offhand insensitive comments, Kim took note. Teachers may not realize when they make hurtful remarks, she said, but students notice. The training reminded her not to make assumptions about students based on things like their clothing choices or the way they speak.

The district had offered diversity PD before, said Womack, but it was voluntary, and focused mostly on holidays like Black History Month. Now, equity training is essential professional learning—the district advocated to include it in teachers’ negotiated contract in 2016.

A series of three trainings are mandatory for all teachers in the district: a course on self-identity, one that explores stereotypes and microaggressions, and one that addresses the historical marginalization of students of color in the United States.

Eric Cohen, a 4th grade gifted-intervention teacher who is white, said the trainings have pushed him to reflect on his own discipline practices.

If two black boys broke a rule in his class, for example, had he doled out the same consequences as he would have to two white girls?

Facilitators gave teachers the tools to make different choices, Cohen said. “Instead of writing a referral for a student who’s misbehaving, think about—well, what’s going on? What’s happening in that kid’s life, and how could I address it in a different way than a referral?” he said.

Asking these questions contributes to a shift in mindset, said Mahoney-Curry: Instead of cataloguing students’ and families’ perceived deficits and casting blame, teachers are encouraged to focus on tackling the structural barriers at school that prevent student success.

But even as some teachers have examined—and changed—their practice, not everyone is ready to have these tough conversations.

Joyce Bukovac, a high school math teacher in the district, was part of the equity task force and participated in the pilot trainings. Exploring identity and bias with her fellow equity council members in those first sessions felt safe, she said, because she trusted them. But when she participated in a later training with a broader group of district staff, she noticed that some people were visibly uncomfortable. “It’s hard to build trust in a 45-minute or half-hour session,” she said.

Preaching to the Choir?

This is the tension that school districts face in deciding how to roll out professional learning around implicit bias. Make these trainings optional, and the staff that show up are invested in changing school culture and their own practice. Make trainings mandatory, and you’ll reach everyone but face additional challenges. Before people from diverse backgrounds can feel comfortable discussing their experiences with race, they need to spend time developing “psychological safety,” said Womack. Even once teachers build that trust, they have different beliefs about what causes opportunity gaps, he said.

Participants brainstorm ways to address implicit bias during one session in the day-long professional development.
—Meg Oliphant for Education Week

Schools and districts need to decide for themselves which approach works best for them and their teachers, said Norma Rodriguez, the organizing and policy director of Californians for Justice. Starting with one school or one group of committed teachers can still effect change, she said. “The trickle effect rolls out.”

Long Beach hasn’t mandated the CFJ workshops for all teachers, and is still in an exploratory phase when it comes to developing districtwide equity and bias trainings, said Jill Baker, the deputy superintendent of schools for Long Beach Unified. These CFJ trainings could form the foundation of an eventual training curriculum, she said.

In Cleveland, ongoing training has been essential, said Mahoney-Curry. Teachers need continuing conversation with colleagues. “It’s not something where you can say, ‘Here: Do this, and you’ll be fixed.'”