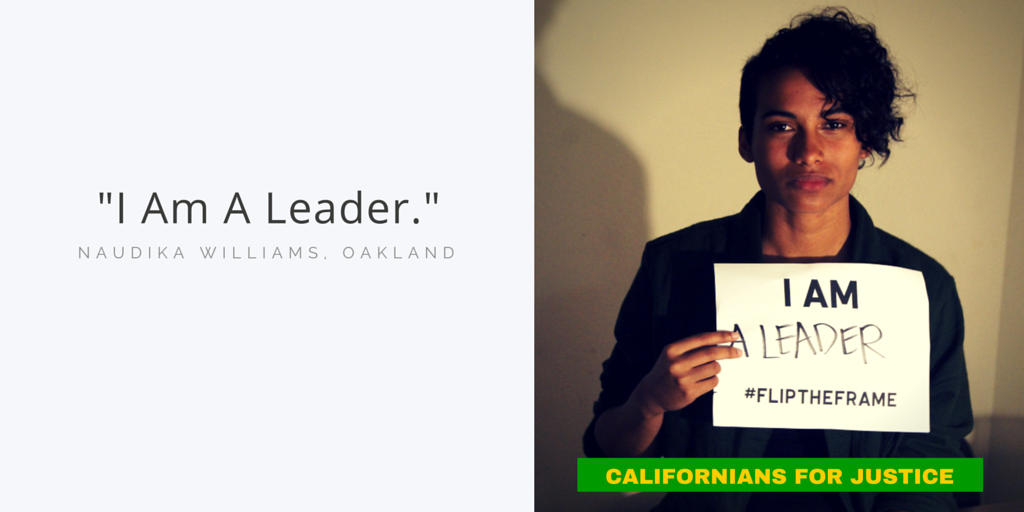 “Many say that youth never want to be involved. The truth is, that youth like me do want to be involved. But often times, adults aren’t listening. My superintendent, Oakland Unified School District Superintendent Antwan Wilson said it best in a meeting with students: “Adults are good at deciding what’s best for adults in education, not always the students”. He’s right. Their decisions and actions, ‘adults’, maybe even you, may not think of me as an equal or even possible to speak up or stand on leveled ground. We’re still seen as babies–naive, we don’t know what we want. But the reality is that we have so much potential and want to improve our schools just as much as any other adult does.” – Naudika Williams 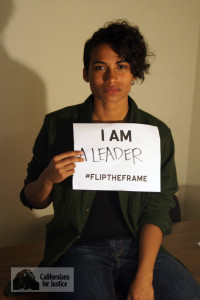 Naudika Williams now a 16 year old Junior at Oakland High, has been involved with Californians for Justice since her Freshman year. In that time, Naudika has become a strong and charismatic leader for other students in her school and district.

In 2014, Naudika was one of the leading representatives of the “Student Voice Campaign”, the campaign that would go on to ensure that high-needs students like Naudika would have a clear role in supporting school district plans on what and how to spend Local Control Funding Formula funds. Naudika met with countless decision-makers at the state and local level. She has spoken out in dozens of board rooms about the resources she and her peers need to succeed, and has rallied hundreds of students and allies in Sacramento for what she and many other students across the state believe their schools and peers need to succeed academically, socially and emotionally. When we value and invest in our young people and their leadership, their leadership and commitment to social change in our schools knows no bounds.

After winning the Student Voice Campaign, Naudika like her fellow leaders, did not stop there. During her sophomore year, she was elected by Oakland Unified School district Local Control and Accountability committee as a voting representative of District 2. She took her commitment further by serving as the  current LCAP Student Advisory Committee Director.

Her passion for education justice stems from her personal experience, a story that she shares often when conveying student issues to decision-makers. She is a young woman of color, from a low income family, who moved from an affluent neighborhood and school to starting high school in a less resourced community with a school severely lacking in support for students. The stark differences in her academic experiences are what inspire her to work to improve public education, for herself, for her peers, and for future students who she doesn’t want to see struggle the same way she has.

If you talk to her, you quickly learn that what motivates her the most is not the policy wins, but the chance to motivate and inspire other students. Above all, Naudika cares about moving others to join the movement, inspiring other young people of color, and low-income students to realize that their voice matters and their leadership is much needed to provide a quality education to all students.

We are proud to announce that CFJ student leader Naudika Williams received the 2015 Youth Warriors Against Poverty Award given by the Margeurite Casey Foundation. Naudika’s dedication to empowering her peers will stay with her throughout her life, and this award will support her in continuing her development as a social justice leader. Congratulations Naudika!